We live in an era where right from banking and getting degrees, to buying mittens for your puppy, everything has shifted online. So making sure that your e-commerce is up and functioning all the time, without the menace of a prolonged website downtime should be your top priority.

A network outage has a domino effect on the entire company. It first starts off with negative reviews on the unforgiving platform of social media, then gives your competitor an edge, and finally leads to a massive revenue loss.

But seek consolation in the fact that even the biggest of companies in the history of human civilization suffer frequent downtimes.

There has been a surge of website outages recently, and we’re talking some gigantic names. Here are just a few of them:

On 23rd September 2020, Tesla experienced the company’s biggest-ever outage. It suffered an hour-long worldwide server downtime that left the luxury car owners unable to connect to their vehicle- neither through the mobile app nor the website. Tesla’s other energy products like Tesla solar, and home battery systems were rendered out of order too. The downtime was reportedly triggered due to an internal failure of their application programming interface (API). However, the Tesla team was quick to detect and remedy the outage, and the functions were reinstated within half an hour.

The tech superpower boasts of connecting people from every remote corner through media like Facebook, WhatsApp, and Instagram. However, on 4th October 2021, it suffered one of the biggest downtimes in the history of the internet. The social media giant was down for mindboggling 7 hours!

It left a good portion of the world in confusion (remember switching on/off your Wi-Fi router several times in frustration?), and wrecked communication for several hours. Zuckerberg blamed it on a server update gone awry after profusely apologizing to those affected.

Users took to Twitter to post nasty memes about Meta’s frequent outages and the company ended up with a loss of approximately $80 million in just ad revenue!

AWS (Amazon Web Services) is virtually synonymous with public cloud computing. Apart from computing, it also caters to networking, storage, security etc. Some of the biggest companies that employ their services are Johnson & Johnson, Coca-Cola and Disney. According to a report by Forbes, AWS controls about 33% of the internet. So, one can imagine the nightmare e-commerce all over the world went through when it suffered not just one but several outages in 2021.

The biggest one transpired on 7th December when the services were inaccessible for more than 8 hours. Well-known brands experienced a huge loss and aggrieved customers took to social media to express their dismay in not-so-kind words.

AWS blamed the downtime on automated software that triggered an “unexpected behaviour” in the internal network and finally knocked out the system.

It took their IT team several hours to resolve the issue and caused a whopping loss of over $100 million.

What is the first thought that instinctively crosses your mind when you run into something you have no knowledge about? To Google it of course! But what if the same messiah were to abandon you abruptly multiple times in a year?

Google (and its online services) encountered several major global blackouts in 2020 (most notably in August, November, and December).

The issue in August was caused by an internal storage quota malfunction and it dragged down indispensable services like Google Maps, Calendar, Workspaces, YouTube, etc. This lasted approximately over six hours. The outage derailed communication and disturbed workspaces across the world.

On April 12, 2021, Google was hit by partial downtime when their Google Docs tools were inaccessible to the users. The team did not post any official statement on what exactly was happening and instead, let everyone hang with the typical “we are experiencing disruption” message.

Google home services too had to bear the wrath of people when they failed to respond to the commands and kept asking the users to “set up the device” instead.

On 8th June 2021, the hashtag #InternetIsDown began to trend across the world. Hundreds of websites were inaccessible and people were met with “error 503” everywhere. So what exactly happened?

Fastly is a cloud computing service provider for several well-known businesses such as Amazon, Reddit, and CNN. Their services include Content Delivery Network (CDN) solutions, cloud security, and other leading cloud optimization tools.

The tech giant was ambushed by a global network outage last year. This was caused due to an obscure software bug prompted by a customer configuration. According to them, an update was sent out to the users on their servers, but the update carried a bug that eventually “broke the internet” for a while. When large third parties like Fastly face downtime, e-commerce (and not to mention their respective IT situation) runs amok. And that is exactly how things went. The server blackout impacted over 80% of their clients and left consumers around the world disgruntled. 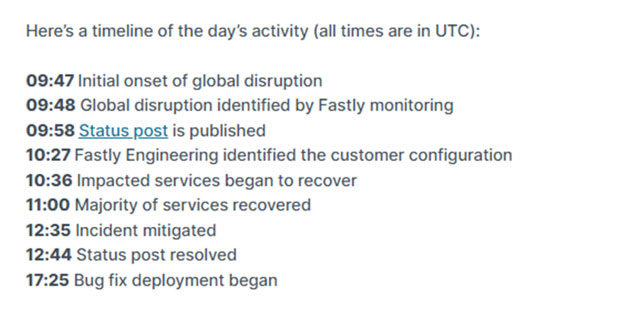 However, Fastly handled the situation efficiently by being transparent with the public. They were swift in identifying the cause of downtime and posted a timeline with consistent updates to keep their concerned groups in the loop. The team remedied the glitch in less than an hour and 95% of the service was back in action.

Conclusion: By now we know that no business, irrespective of the size and high-functioning IT equipment, is ever 100% immune to website downtime. There are several reasons for it and they pose serious repercussions for your company’s growth.

You could hire the best IT faculty in the world and your business will still be susceptible to an outage. Sometimes you just have to make peace with the fact that things are not always in our control. However, you can mitigate the risks by signing up for efficient website monitoring services like Awakish.

We not only alert you when your website experiences an outage but also keep tabs on the overall health of your website. Our services provide uptime monitoring solutions that also give you routine insights. With us, you wouldn’t have to find out about your downtime through a mean Twitter meme. Start your free trial now and rest assured while we monitor your website’s uptime 24×7, 365 days of the year.